Punk’d by a monkey 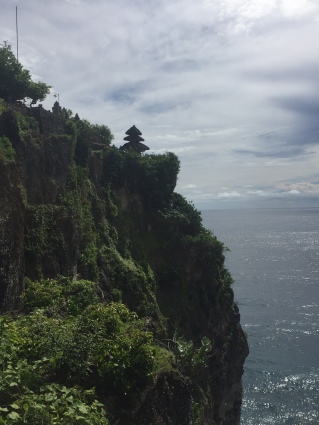 One of the most picturesque temples in Bali is through a jungle path that leads to a cliffside Hindu Temple. As we entered the gates, we saw monkeys swinging from the trees and hanging on branches right above our head. We snagged our cameras and captured the faces of monkeys in their natural habitat.
Those adorable monkeys swung down from the tree and landed on the path in front of us…then it inched closer. We took up close photos of those little darlings. Then suddenly it grabbed Eva’s leg, lifted her foot and stole her flip flop…right off her foot. That little beast of a monkey!
Luckily, Donnie is a monkey whisperer.  He followed it into the jungle and waited for it to drop it while climbing a tree. He also was Eva’s bodyguard throughout the rest of our walk.  They estimate that over 500 monkeys live in the jungle near the temple. They have gotten quite aggressive with the tourists.
As we walked along the path, we watched as those monkeys would creep from the jungle and jump on the back of unsuspecting tourists and run off with their sunglasses. It provided hours of entertainment for us. Isaiah and I started placing bets on who would be the next victim. Seriously, some of the most fun we have had for awhile. 🙂
Apart from the monkey entertainment, we also enjoyed the panoramic views of the ocean and cliffs from the temple. Let the adventure continue!

Posted by 5byfaith on February 28, 2016 in Uncategorized

One response to “Punk’d by a monkey”