The Nyepi “parade” is not your usual parade in the US.  There is no candy being thrown, and no marching bands playing the Star Spangled Banner.  The purpose of Nyepi Eve is to scare off the evil spirits and cleanse the temples.

To give you perspective on Bali, the island is the size of Rhode Island with a population of 4.2 million people. There are 20,000 Hindu Temples. Let that compute for a moment.  Each of these temples builds enormous statues to scare off the spirits and runs them through the streets.  Along with the statues, there are people banging cymbals, drums, and tambourines. Words are hard to describe the experience of Nyepi Eve.

And now…complete silence.  Today is eerily quiet.  Even the Muslim Mosques forego their call to prayer on Nyepi.  The whole island is to be silent, because they believe the evil spirits will pass over the island if they hear no noise.

We have met many Hindus and have talked a lot with those working here amongst Hindus. Because of their belief in many gods, they are very open to hearing about Jesus and including him as one of the gods they pray to.  One of the cool ways God is at work here is through prayer and healings. One of the local pastors told us about a guy living in their apartment complex.  He had a growth in his left eye that was leaving him blind in that eye. He was worried that if he went blind, he would not be able to work and support his family. The pastor offered to pray for him and the guy explained that a business deal had gone south and a curse had been placed on him and the evil spirit was making him blind.  Our pastor friend explained that our God is more powerful than curses and prayed for compete healing of his eye.  The next day the guy showed up at his door with his mother.  The prayer for his eye had been answered and he wanted his mom to have healing of her back. There are currently 8 members of that family that have decided to place their faith in Jesus.  Once they have seen that the “good spirit”, the Holy Spirit, is more powerful than their other gods, their eyes are opened to the power of God.

We have heard, and seen, some great ways God is at work here.  Being here for Nyepi has been quite the experience!  We continue to pray that the power of God will sweep over Bali in a mighty way. 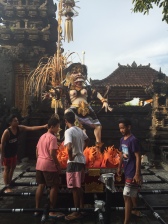 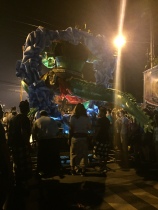 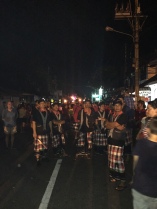 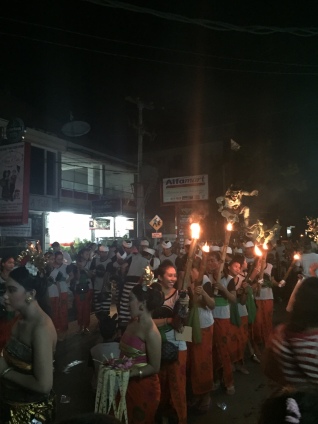 Posted by 5byfaith on March 9, 2016 in Uncategorized

One response to “Happy Nyepi!”